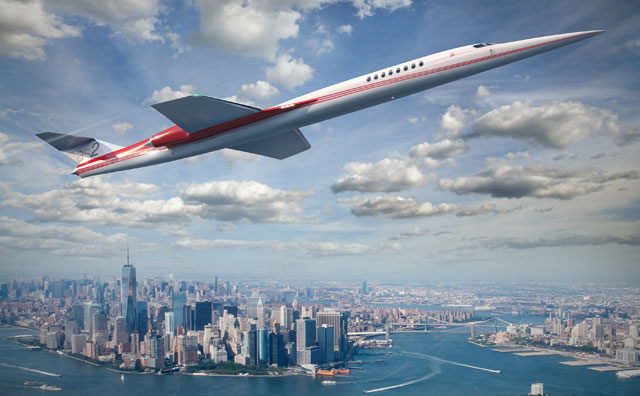 Since the retirement of the Concorde in 2003, aircraft manufacturers have invested relatively little in new supersonic technologies, despite the obvious reductions in point-to-point flight times. While Gulfstream, Lockheed Martin, NASA, and others are doing interesting work in the area of mitigating sonic boom, this technology is far from mature. To date, no established original equipment manufacturer is building an aircraft based on a low-boom design.

The largest hurdle for civilian supersonic jets is not sonic boom mitigation, but meeting stringent airport noise standards during takeoff and landing, a concern voiced by airport neighbors ever since the first business jets took flight.

Those first aircraft entered service more than 50 years ago, and were as noisy as military fighters. By the early 1970s, the FAA and others agencies mandated lower noise standards for jet aircraft: standards the Concorde was unable to meet. So, will we ever fly supersonically again? Will you again be able to enjoy the benefits of reducing trans-Atlantic time by three hours, or longer trans-Pacific routes by six hours? Or more?

Are the regulatory and technological hurdles too high?

While all of these technical and regulatory issues likely have solutions, solving them will not be quick or simultaneous.

There is no single sonic boom that occurs when a jet reaches the speed of sound. Rather, as long as the aircraft is flying faster than Mach 1, the boom continues – it’s just heard only once as the jet flies over. A first generation supersonic jet like the Concorde can operate at low supersonic speeds (up to about Mach 1.2) overland without a boom reaching the ground, and up to Mach 1.5 over water. Moreover, it can meet current “Stage Four” airport noise requirements. Newer designs may incorporate boom mitigation technology that would allow unfettered cruise over land at speeds up to Mach 1.6 and beyond.

With support from Airbus, Aerion Corporation is developing a supersonic business jet, dubbed the AS2, with first flights planned for 2021, at a sale price of $120 million. Market studies indicate a demand for 600 supersonic business jets in the first 20 years, even with the proviso that such an aircraft would be restricted to subsonic speeds over land.

What are the advantages? The typical user of today’s long-range business jets could expect to save as many as 200 hours annually – time to reach more destinations, meet with more customers, confer more frequently with partners, and complete more deals. Supersonic speed can enable a major boost in personal productivity, and has the potential to reduce travel-induced physical and mental stress.

A first generation supersonic business jet, cruising at Mach 1.4, would shorten a San Francisco to Singapore trip from more than 17 hours to about 12 hours. Or imagine taking off from New York in the morning, conducting a half day of business in Paris, and returning home to New York that same night.

The case is compelling, and the technology is within our grasp. Expect to see a faster future within a decade, and probably sooner. BAA