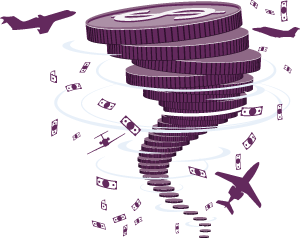 From 2003 to 2007, the business aviation industry experienced a boom of unprecedented proportions. Manufacturers sold record numbers of new aircraft; some sellers were making millions by selling their near-term delivery positions to buyers unwilling to wait two or three years for a plane; retail values for virtually every model of pre-owned aircraft rose steadily, quarter after quarter; and available inventory shrunk so much that pristine, lightly-used large cabin aircraft were sold literally within hours after coming to market.

With all of this activity, and the corresponding billions of dollars at stake, the major banks found themselves in keen competition for every deal. Offering term lengths of ten years, rates well below 100 bps, and loan-to-value (LTV) of 90% and, in many cases, up to 100%, had become standard operating procedure if the bank or lending institution wanted to remain a player in aircraft finance. Additionally, “one off” loans — loans to clients who had no other relationship with the bank — were commonplace.

But today’s lending environment is almost unrecognizable from the one that existed before late 2008, with respect to the willingness, or in some cases even the ability, of major financial institutions to finance private aircraft. While the 2008-09 economic meltdown was in progress, activity in purchasing and financing business aircraft pretty much came to a halt. Many manufacturers claimed negative sales (more deals cancelled than new aircraft sold). Banks, especially those which specialized in leases rather than loans, now faced an abundance of aircraft to sell — and a market with virtually no buyers.

Today, as banks slowly are returning to the business of lending money on aircraft, some new ground rules seem to apply. First, the days of doing only an aircraft deal are over: now, “relationship matters.” If the prospective buyer is not already an existing client with strong financials, he or she will be required to pledge substantial amounts to the bank in non-lending, investment-oriented areas.

Our bank is not alone in presenting itself as a “non-asset lender,” in which the financial strength of the borrower is scrutinized and weighted more substantially than the strength of the aircraft, which is looked upon as the “second way out.” A financially sound client looking to buy what the bank would consider a less-than-stellar aircraft likely still would be able to obtain funding. But a client with somewhat spotty financials, even though the aircraft being considered may be top tier, probably would not.

“Twenty is the New Thirty”

Gone are the days of the ten- or fifteen-year loan. While some banks or lending institutions still may offer seven-year terms, a term of five years is average, and three is preferred. And while the boom years leading up to 2008 saw routine lending on older aircraft — Gulfstream GIIIs, Challenger 601s, Falcon 50s, et al. — most banks now are content to lend only on aircraft 10 years old or newer, very occasionally considering one as old as 15 years for the right client. Before the downturn, the sum of an aircraft’s age and the term of the loan should not have exceeded thirty; that sum now rarely, if ever, exceeds twenty.

Of course, not every financier has the same target business and target clients. Thus, not every bank has adopted these exact policies. Some still may specialize in asset lending, in which the aircraft loan may be the only business done with a client; while others specialize in financing older aircraft (in this case, you can expect loan rates to be high and LTV to be low); while still others offer leasing as an alternative to a loan.

As the recovery continues, aircraft lending for many private banks appears to have crystalized with much more clearly defined parameters than in the past: ultra-high net worth clients, lending only as part of a much broader relationship, limiting the age of the aircraft being considered, and terms that make good business sense.

Rational, rather than emotional, lending is the order of the day for private banks, and for other knowledgeable financial institutions. BAA