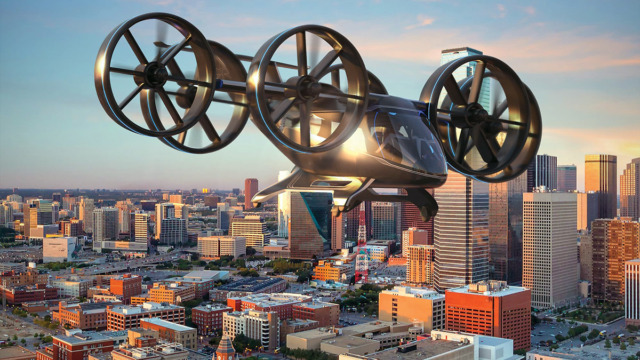 Heading to JFK from midtown Manhattan? Expect the taxi trip to take at least 45 minutes to an hour, for a fare of $52. Or you could travel the same route in five minutes on a Blade helicopter for a charge of $195.

Before long, you might be able take a $70, ten-minute flight with minimal carbon footprint, on an electric vertical take-off and landing aircraft (e-VTOL). Such aircraft, which include fixed wing, helicopters, and other aircraft with powered rotors, can take off, hover, and land vertically.

In the last few months, several companies have announced prototypes or plans for “flying cars” above major metropolitan areas – all run on electricity. It’s a scenario only George Jetson could have envisioned. While you might purchase or charter an e-VTOL for your own use, they’re also an attractive option for those passengers who don’t mind sharing. (See “Accessing the e-VTOL Network,” BAA July/August 2017).

Currently, more than 100 electric aircraft are under development around the globe. Nineteen of these companies are working on air taxis. In May, Lilium, a German air taxi company, announced the first test of its full-scale, all-electric five-seater aircraft, a precursor to the Lilium Jet. CA-based Kitty Hawk’s Cora is an “electric, autonomous fully fledged air taxi that takes off like a helicopter and flies like a plane.”

PAV by Aurora Flight Sciences (a Boeing Company) is a “fully-electric vehicle designed to provide safe, clean, and quiet transportation, designed for urban commutes with typical ranges up to 50 miles.” Airbus’ CityAirbus demonstrator is a “multi-passenger, autonomously piloted eVTOL vehicle designed for urban air mobility.” In 2018, Rolls-Royce stated that its hybrid concept “EVTOL” was under development.

EmbraerX announced its “aircraft … based on the key design drivers of safety, passenger experience, affordability and a very low footprint for the community, in terms of noise and emissions.” The electric VTOL Nexus is under development by Bell, which plans to make it available in key major markets “by the mid-2020s.”

Earlier this year, Pipistrel, based in Slovenia, announced an eVTOL using Honeywell avionics, and was among those chosen by Uber to develop an air taxi prototype.

In addition to these larger companies, small start-ups with big investors such as Joby Aviation, Volocopter, and Terrafugia (owned by Volvo), have similar programs under development.

Business models range from app-based, on demand charter to subscriptions and shares.

Where will these new electric vehicles take off and land? One answer is “Urban FBOs” or “Urban Skyports,” located on top of office buildings or parking garages, or in large open spaces in metropolitan areas.

German start-up Volocopter announced plans for a network of “Volo-ports” – circular launchpads that project from atop skyscrapers, transporting “up to 1,000 passengers per day.” And Transcend Air and partner Indiana-based Lily Helipads have begun design on solar-powered “Vertipads,” initially to be located on urban waterfronts in NYC, San Francisco, Boston, and Montreal.

Creating and safe-proofing all the other parts of an eVTOL system – including getting the ATC and airspace right and the regulations in place, will set the pace for the future of Urban Air Mobility. But within the next five years, for those who have the means and the desire, gridlocked ground traffic to the airport could be an outdated concept. BAA