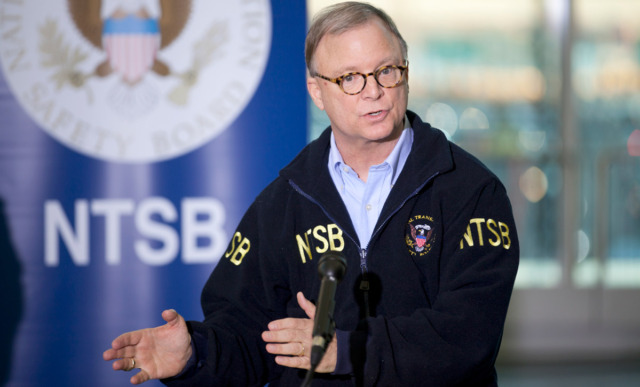 It’s a shame when really effective people get pushed out of senior government posts for purely political reasons, but it happens every time a new president is elected.

The latest example is President Biden’s decision to prematurely replace Robert L. Sumwalt as chairman of the National Transportation Safety Board. Sumwalt – first nominated as a Republican board member by President George W. Bush in 2006 and re-nominated later by Presidents Obama and Trump – will be stepping down at the end of June, six months before his current five-year term was to expire. Democrat Jennifer Homendy was nominated to succeed him.

The good news is Sumwalt was an ideal candidate to serve on NTSB, and he had a great run. His 15 years as a board member rank second only to the 16 years served by Francis H. McAdams, one of five original members nominated when NTSB was established in 1967.

Sumwalt’s resume checked just about every imaginable box for a Safety Board candidate. He began flying lessons when he was 17. After earning a B.S. from his home state University of South Carolina, Sumwalt got a Masters degree at Embry-Riddle Aeronautical University, specializing in aviation safety systems and human factors.

Sumwalt spent 24 years as pilot for Piedmont Airlines and US Airways. He also helped develop numerous safety programs as a member of the airline’s flight safety department. Concurrently, he was an air safety representative for the Air Line Pilots Association for 17 years and chaired ALPA’s Human Factors and Training Group.

After his airline career, Sumwalt spent eight years managing the corporate aviation department at SCANA, a large energy company. By 2006 he had logged 14,000 flight hours and was type-rated in five different models of aircraft.

NBAA President and CEO Ed Bolen told BAA Sumwalt “is the consummate safety professional. He is thoughtful, knowledgeable, and absolutely relentless in his pursuit of excellence.”

“Throughout his distinguished tenure at the NTSB, Robert has been a champion for Safety Management Systems, safety cultures, and data-driven initiatives to identify root causes of accidents,” Bolen said. “We are a better and safer community because of Robert’s leadership.”

Bryan Burns, president of the Air Charter Safety Foundation, said Sumwalt was “a big advocate for people in the back end of the airplane … he was always looking out for the Part 135 charter end user and how best to educate passengers on safety,” Burns said. This included urging consumers to ask questions about training standards, FAA certification, and insurance coverage before booking a charter flight.

Coincidentally, ACSF was founded in 2006, the same year Sumwalt joined NTSB. Burns said Sumwalt’s “unwavering commitment and passion for safety has had a major impact on our organization.”

Recommendations made by NTSB, including those on its “Most Wanted” list, have aligned with the goals of ACSF including voluntary adoption of Safety Management Systems by corporate and charter operators, Burns said.

SMS programs have been required for large Part 121 scheduled air carriers for a number of years. In response to NTSB’s recommendations, FAA is expected to issue a notice of proposed rulemaking next year aimed at making SMS use mandatory for Part 135 operators.

McAdams and Sumwalt came from different backgrounds and served in different eras, but both got into aviation early and stuck with it. McAdams, born in Brooklyn, N.Y. in 1915, was 24 when he earned an airline pilot certificate in 1939. From 1942-1946 he was a U.S. Navy pilot, flying combat missions off aircraft carriers. After leaving the Navy, McAdams became a crash investigator for the Civil Aeronautics Board, which was then responsible for aircraft accident investigations.

McAdams and Sumwalt shared a passion for raising standards and finding ways to reduce the number and severity of accidents. Their energy, insight and relentless pursuit of safety improvements helped drive meaningful change. BAA