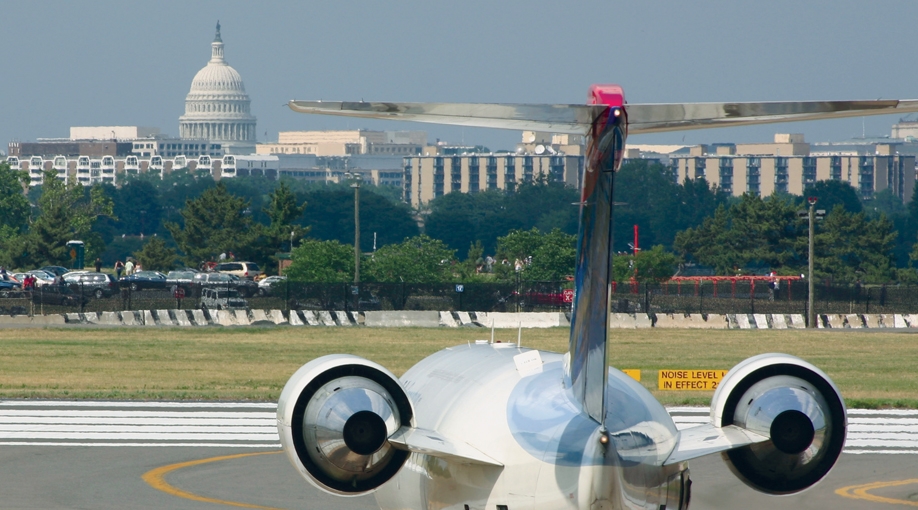 With Republicans in control of both the House and Senate as the 114th Congress convenes, the possibility exists that Congress might actually debate and pass some important legislation this year. (Wild concept, eh?)

If the legislative branch does start functioning again, an increasing number of company executives, trade association representatives, and individuals will be trekking to Washington to lobby their elected representatives.

For those with access to business aircraft, there are three major airports to choose from: Washington Dulles (IAD), 27.2 miles west of Washington in Virginia; Baltimore-Washington International (BWI), 32.4 miles to the northeast in Maryland; and Washington National (DCA), 5.2 miles from Capitol Hill.

Flying into IAD or BWI is pretty simple — tell your flight crew when you want to depart and off you go. When you arrive you’ll be facing an hour (or more!) on congested highways to reach congressional office buildings and most federal agencies in Washington, D.C.

Passengers arriving at DCA can get to congressional office buildings in 10-12 minutes. But there’s a catch. Passengers and crewmembers on non-airline aircraft must adhere to a rigorous security protocol.

In the aftermath of the 2001 terrorist attacks that brought down four U.S. airliners, security officials ordered numerous steps to prevent similar attacks, including installation of secure, lockable doors on airliners to keep intruders out of the cockpit.

That prohibition continued until 2005 when — after countless hours of meetings between members of the business aviation community and federal transportation security officials — agreement was reached on the DCA Access Standard Security Program (DASSP).

Key elements included: vetting of security coordinators and flightcrews; screening/search of passengers, baggage, and aircraft for flights coming to and departing DCA; flight authorizations processed by TSA HQ; FAA slot reservations with assigned times; nonstop flights only to DCA and only from authorized FBOs at designated “gateway” airports; and, the carriage of an Armed Security Officer (ASO).

Few operations were conducted under DASSP initially because crew vetting took time and there were only 12 gateway airports. But as more flight departments became acquainted with DASSP’s requirements, and more gateway airports and FBOs were added, flight operations grew — from a few hundred in 2007 to just more than 900 by 2010.

In 2011, DASSP operations jumped to 1,400 after federal officials acceded to industry requests and permitted operators more flexibility in swapping out crews, aircraft, and permitting adjustments to arrival and departure times. Discussions continue about finding an alternative to the ASO requirement, with indications a resolution could come soon.

There are now more than 200 DASSP-approved operators, and a significant number of others who have met all the requirements but are not currently flying into DCA — primarily because of the ASO requirement. Passengers, crews, and aircraft can now be cleared for flights to DCA at more than 170 FBOs and flight department hangars on 100 gateway airports in 40 states.

Mary Miller, vice president, industry and government affairs for Signature, has been based at DCA since the days when having scores of airplanes parked on the GA ramp was the norm. She estimated DASSP operations would reach 1,500 by the end of 2014. “It’s not like the old days, but boy, has it come a long way,” she said.

Particularly rewarding, Miller said, is observing a flight department making its first DASSP trip. “The back seat passenger has just experienced an eight-minute ride” from his meeting on Capitol Hill back to DCA. “He’s getting ready to go through the magnetometer, standing there smiling, saying, ‘This is great … we’ll be back!'” BAA