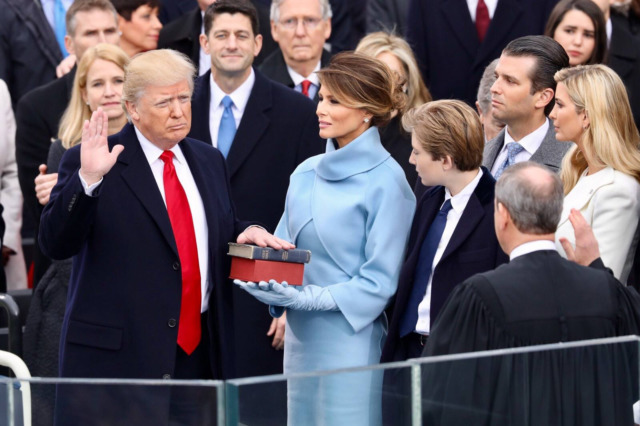 Three years ago the business aviation industry had a pile of worries on its plate. Donald J. Trump, the wild-card Republican candidate, had just been sworn into office as president – and no one had any idea what to expect. *

Would Trump support a House initiative to privatize the U.S. air traffic control system and impose a new system of user fees on business aviation? The nation’s scheduled airlines were pushing hard for adoption of the privatization bill, introduced by the powerful Republican chairman of the House Transportation & Infrastructure Committee.

Another concern was whom Trump might name to be FAA Administrator when incumbent Michael Huerta’s term expired in early 2018. Trump had suggested he might select his own personal pilot for the job, even though that individual had no leadership experience in a large organization like FAA.

Trump also pointedly noted his personal pilot was critical of FAA’s NextGen ATC modernization plan – a massive undertaking launched a decade earlier, which had already cost billions of dollars. It was truly frightening to think FAA might find itself overseen by a board of directors controlled by the scheduled airlines, headed by an inexperienced manager, and contemplating disruptive changes to a consensus-driven and carefully-crafted NextGen program.

This spring, different uncertainties lie ahead. But ATC privatization is no longer a threat. A five-year FAA reauthorization bill was enacted in 2018, so no pressing aviation legislation needs to be debated by a sharply divided, post-impeachment Congress. Stephen Dickson, who won Senate confirmation as FAA Administrator last year, is demonstrating on a daily basis he has the experience and the chops to succeed in his new job.

And the NextGen program marked a major milestone at the end of 2019: the conclusion of a 10-year window set by FAA for owners to install ADS-B units in their aircraft in order to continue flying in controlled airspace. According to the aircraft-tracking web site FlightAware, the percentage of U.S.-registered, turbine-powered, business aircraft equipped with ADS-B soared from just 25 percent in October 2016 to 90 percent in December 2019.

The surprisingly strong U.S. economy and a robust stock market bode well for business aviation. But there are significant concerns to offset the domestic financial optimism.

Chief among them is the coronavirus outbreak in mainland China, which is disrupting travel and trade throughout the Far East. On Feb. 7, NBAA cancelled this year’s Asian Business Aviation Conference & Exhibition (ABACE), “given health concerns and other special challenges for event participants.”

ABACE 2020 was to take place April 21-23 in Shanghai. The annual event is a major business aviation showcase and important marketing opportunity for the industry in the region. NBAA’s announcement came after U.S. airlines and others around the world halted or radically reduced flights to and from mainland China. Travel disruptions, falling demand for goods and services, and health concerns in Asia are expected to negatively affect the global economy for months.

The hotly contested U.S. 2020 presidential election is another question mark for business aviation. Proposals by candidates Bernie Sanders and Elizabeth Warren calling for imposition of severely higher income and “wealth” taxes are scary. The prospect that such measures might be enacted would almost certainly disrupt the stock markets and dampen demand for business aircraft.

The muddled results dribbling out of the Democratic caucus debacle in Iowa certainly did not provide much clarity about who that party’s nominee will be. Nor did the Feb. 11 New Hampshire primary – still lots of candidates and highly fragmented results.

That uncertainty could persist for months, and uncertainty tends to make potential buyers defer big-ticket purchases. It’s a concern, but certainly a less daunting environment than the industry was facing just three years ago. BAA