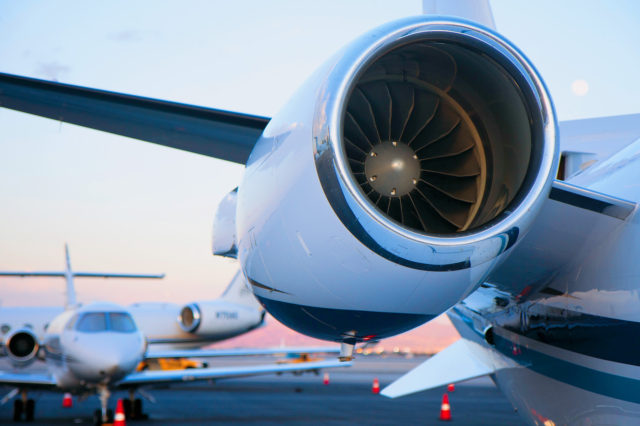 The annual high-stakes card game to determine if Congress can ever pass a long-term FAA reauthorization bill is underway in Washington, with some new players, a couple of new plot lines, and action on multiple fronts.

The most prominent new player is President Donald Trump. The president’s first budget message devoted just 43 words to the U.S. air traffic control system, saying it should be removed from FAA and delivered to “an independent, non-governmental organization…”
That was certainly not a surprise to Rep. Bill Shuster (R-PA), the chairman of the House Transportation & Infrastructure Committee and principal congressional proponent of privatizing the U.S. air traffic control system. Trump and Shuster campaigned together on several occasions last fall, and Trump appears willing to let Shuster do the heavy lifting on ATC privatization.

As part of that effort, Shuster got new U.S. Secretary of Transportation Elaine Chao to join a delegation to Canada at the end of March to meet with Canadian transportation officials to discuss the Nav Canada experience.

ATC privatization backers love to point to Canada. In 1996 a new entity called Nav Canada became the owner of all air navigation services formerly provided by Transport Canada. By most accounts, Nav Canada, which is funded by a complex series of user fees, has done a good job of providing air navigation services. But claiming the Canadian experience can or should be replicated south of the border is a huge stretch.

Canada has fewer than 34,000 registered aircraft and logs 12 million aircraft movements annually. Most of that activity occurs within 200 miles of the U.S. border, where nearly 80 percent of all Canadians live and work.

While Nav Canada has seven air traffic control centers and 41 control towers, FAA operates 21 ATC centers and 476 control towers. That’s because airspace is much more densely populated in the U.S., with 7,000 aircraft in the air at any given time and nearly 24,000 commercial flights daily. In graphic terms, think of Nav Canada’s operations as a walnut and the U.S. ATC system as a watermelon.

The House aviation subcommittee held the first of what are expected to be several hearings leading to mark-up of an FAA reauthorization bill centered on the same ATC privatization plan Shuster was pushing in the previous session of Congress.

In the Senate, where there is much less enthusiasm for privatization, the Senate aviation subcommittee heard expressions of concern about another Trump proposal – eliminating all funding for the Essential Air Service program. EAS, which came into existence in 1978 as part of the Airline Deregulation Act, provides subsidies to carriers which operate scheduled flights into small community airports.

Laurie Gill, the mayor of Pierre, South Dakota, the state capital, told the subcommittee that without EAS service local residents would have to drive 200 to 500 miles to access reliable scheduled air transportation. Officials and residents of the other 108 EAS-eligible communities in the continental U.S., plus nearly 200 more points in Alaska, share similar concerns.

The widespread industry opposition to privatizing the ATC system was underscored in letters sent to the senior members of House and Senate transportation committees in March by a coalition of 16 business and general aviation organizations, including AOPA, EAA, GAMA, and NBAA.

The coalition reiterated its “very real and long-standing concerns,” about the likely effects of privatization on general aviation. It called on Congress to “provide ample opportunity for all stakeholders and citizens to carefully review, analyze and debate any proposed legislation changing the governance and funding for air traffic control.” BAA